Treasury Bills: What Are They?

The rise in interest rates in recent months has seen yet another rise in interest (pun intended) generated, based on what I have read online (yes, the Bedokian does scour the WWW for information) and offline amongst my friends, acquaintances and colleagues. First, there was (and still is) the hype over Singapore Savings Bonds, or SSBs (which I had written a piece here). The upcoming buzzword is “treasury bills”, or T-bills for short.

Introduction Of The T-Bill

In fixed income nomenclature, bills are debt instruments, issued by a government, whose duration is one year or less. Hence in layman speak, they are bonds with a very short term.

Due to this short-term nature, the coupon rate of a T-bill tends to be similar with the prevailing interest rate as at the time of the former’s issuance. With a tenure of one year or less, it is akin to a form of fixed deposit that you will find in banks. You could sell the T-bill on the open market before maturity, but it would be subject to market forces and you may profit or lose some amount, so it is recommended to hold it till maturity.

Under The Bedokian Portfolio’s classification, the T-bill belongs to the cash asset class due to its two main characteristics: the short duration and the positive correlation to prevalent interest rates, from which how cash derives its returns. Liquidity wise, it is easy to just sell it on the open market and get back the principal, though as mentioned in the previous paragraph there are market risks involved.

The Workings Of The T-Bill

Unlike other debt instruments, where the coupon is paid half yearly or annually, the T-bill’s coupon is paid upfront. T-bills are issued at a discount below par value, and the difference is the coupon/interest paid out. For example, I had applied for a one-year T-bill at the minimum bid of SGD 1,000, and after the closing of the application, the T-bill is issued at SGD 950, and I will get back the SGD 50. This SGD 50 is the coupon/interest for the T-bill, which the yield works out to be 5% (50/1000). When the T-bill matures, the full SGD 1,000 sum is returned.

For retail investors like you and me, Singapore T-bills can be applied using cash, Supplementary Retirement Scheme (SRS) account and Central Provident Fund (CPF) account through the three local banks: DBS, OCBC and UOB (note: you could sell your T-bills over the counter at either one of these three banks). Applications using cash and SRS can be done online or through the automated teller machines, while in-person applications are required at the bank where the CPF investment account is at.

Unlike SSBs, where there is a consolidated limit of SGD 200,000 per individual, T-bills (and other Singapore government bonds) limits are much higher (at least SGD 1 million) for each issuance. Also, you can submit as many bids as you want, whether through non-competitive or a series of competitive bids with different yield numbers.

The Bedokian Getting The Feet Wet

Here is an excerpt of the results of the T-bill BS22115F from the Monetary Authority of Singapore (MAS) website (Figure 2): 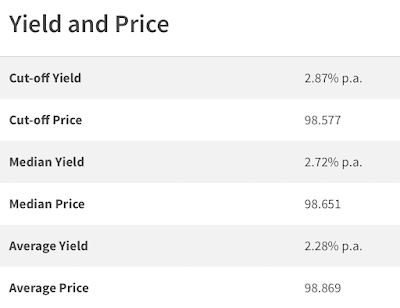 Since this is a cash application, the T-bills appeared in the Central Depository account on 10 Aug 2022 (Figure 4).

Even if not for investment purposes, the T-Bills are another good alternative to store your cash which you foresee not using for at least the next six months to a year.