Barbells, Pyramids And Your Portfolio

Most investment portfolios and funds come in the form of a pie chart, denoting the various asset classes, geographical locations, sectors and industrials, companies, and their respective make-up, usually in percentages. Some argued that such charts do not necessarily convey an important component of portfolio management, and that is risk. I can show a pie chart that is made up of 60% tech stocks that had gone way above their valuations and 40% junk bonds, but to the novice (or even a seasoned investor if he/she is not careful) the risks are not clearly defined. The barbell and pyramid enable a viewer to see the risk factor of each financial instrument roughly in their respective places.

Let us take a closer look at these two.

In the mainstream barbell portfolio strategy, securities and financial instruments are grouped into either low-to-no-risk or high-risk categories, and there is no middle ground. An example would be to have government bonds and defensive counters at the low-to-no-risk part, while placing those highly valued tech stocks on the other. If a 50-50 split is adopted, it would look something like this: 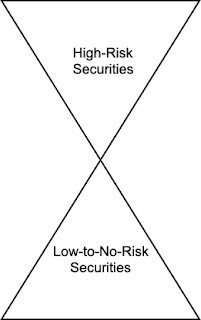 We could see an asymmetric-looking barbell, depending on the risk appetite and profile of the investor. If an investor prefers more safe instruments than riskier ones, then the bottom triangle would look larger; or for an aggressive, high-risk taker, the top would be larger instead.

Some variations of the barbell included a middle ground, with medium-risk securities making up the middle (e.g. corporate bonds), forming the “handle” of the barbell. This portion kind of give a “best of both worlds” scenario of having counters between the risk spectrum.

The pyramid investing strategy, or sometimes called the risk pyramid, labelled investments into three main tiers: low-risk forming the wide base (typically 40% to 50%), medium-risk as the body (30% to 40%) and high-risk being the apex (10% to 30%), as shown below: 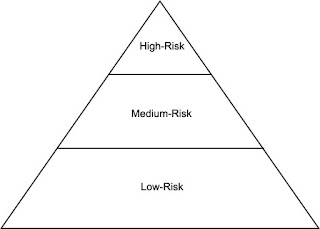 Usually low-risk assets such as cash, government bonds, etc. are at the bottom, followed by the typical dividend-paying equities, corporate bonds, REITs, etc. in the middle, and volatile counters at the top. In some combinations, the pyramid is further split into more than three, especially in the middle part where the medium is further classified into lower-medium, medium-medium or upper-medium, much like our current description of the current social middle class (e.g. lower-upper middle class).

The very first issue on using such strategies would be the definition of risk, since it is this very parameter that you are classifying your investments. Risk is subjective: it means different things to different people at different times. We could say about government bonds being low risk, since it is after all the debt of a country, but different countries have different risk profiles, and some provide yields that are comparable to those of our local REITs’. Also, some counters which are deemed defensive in nature years ago may not appear to be so now (case in point: a telco counter that had went to a 12-year low recently).

We could use numbers to define them, such as standard deviation on measuring volatility, a typically used risk metric, or ratios like Sharpe and Sortino. The main problem in using them is they are not easily found online, and even if available, they may not be free, especially figures of local counters. The other way is to calculate them out, and spare time and Excel know-how is needed.

Another easier way is to use the beta coefficient (or beta for short), which is the measure of a security’s return relative to the general market. With the market’s beta as 1, a counter with a lower beta is seen as less volatile than the market. Beta numbers are easily searched; Yahoo Finance has them. The problem of beta is due to its relativity to the market returns, and a low beta does not mean it is not volatile by itself.

In addition, these statistics are based on the past, not the future, so the risk definition is at best backward looking. While it is understandable to use past data as an indication, it is not foolproof, but we have to make do with whatever information is at hand at least to have a clear set of criteria.

Summarizing my views, which I would elaborate below, in terms of visualizing risk, the barbell is good for looking at one portfolio, while the pyramid is more for looking at multiple portfolios and a risk overview of your total finances.

Let us take a look at the barbell. Using the balanced Bedokian Portfolio (35% equities, 35% REITs, 20% bonds, 5% commodities and 5% cash), I would place the cash and government bonds at the low-to-no risk portion; corporate bonds, low volatile/defensive equities and REITs at the middle (by the way I am using the handle model, which I will state why later); and the higher volatile/growth counters and commodities at the top. If I have other portfolios using my Central Provident Fund, Supplementary Retirement Scheme monies and/or with my disposal income (investment or trading), I can convert them to barbells, too.

With the few barbells, I will create a pyramid by corresponding their risk levels from each barbell: the high-risk parts will form the apex, the financial instruments in the handles will form the middle (here is the reason why I used the handle model), and the low-to-no-risk parts at the base. To make your pyramid more holistic, you may want to include all other holdings outside of your investment and trading portfolios, such as your emergency funds, cash savings, insurance savings plans, etc.

The barbell and pyramid models work well for investors who diversify their portfolios by risk and/or follow the simple equity-bond portfolio. As for myself, I will view them as risk-perspective models that I can transform my pie-chart to for a better understanding. However, I still hold my diversification belief in the order of asset classes, regions/countries, sectors/industries and individual companies and organisations, that would reduce risk.