What Is The Bedokian's Fourth U.S. Counter?

When I shared about our U.S. holdings in the “Inside The Bedokian’s Portfolio” series here and here, I mentioned there were four securities/counters that I had identified for newbies to go into when they want to start off in the U.S. markets. I had stated three so far, which are SPDR S&P 500 ETF (SPY), Berkshire Hathaway Class B (BRK.B) and Apple (AAPL). The next obvious question is: what is the fourth U.S. counter?

Sometime in 2014, I had researched and concluded on four U.S. counters which were relatively safe for investors, newbies and seasoned alike, who were stepping into U.S. markets for the very first time. The rationale is simple: SPY and BRK.B represented U.S. equity markets in general, while AAPL and the fourth counter stood for the technological and innovation might of the U.S.

Since the hint is there, you might be wondering if this fourth one is a giant e-commerce firm that started off as an online bookstore, or an electric vehicle company whose founder had a vision of a Mars settlement within a few decades. Well, it is not these two.

The answer is Alphabet (formerly known as Google).

And that is not all. Google is beyond just search engine; it developed the Android OS, the other most commonly used mobile device operating system in the world; it produces its own range of mobile phones (Pixel), and it owns YouTube. To sum it all up, it represented almost the entire internet ecosystem, ranging from simple things like email services (Gmail) to remote collaborations like Google Classroom. And those were back in 2014.

Fast forward to 2021, the abovementioned services were improved, and a slew of new services was introduced, too, such as Google Meet (which came in useful during the COVID-19 pandemic) and Google Pay.

Giving an objective perspective, some of the Google services do face stiff competition from other equally strong rivals (e.g., Apple and Samsung for payment, Microsoft and Amazon for cloud services, etc.), and it resulted in at least one big exit (social media Google Plus). Furthermore, they are subjected to a number of legal and regulatory issues and suits, ranging from anti-trust to privacy (but frankly, some tech firms face these issues, too).

Like Apple, Alphabet is probably seen as getting more evolutionary than revolutionary, especially when digitization and digitalization are getting more common place which gives the impression that not much stuff is surprising anymore, and also other companies, both big and small, are also introducing their own individual/suite of applications that could be seen as substitutes for their products and services.

Things have changed since my analysis back in 2014, especially with the coming of the “new world (tech) order” and the emergence of bigger/newer/faster challengers (e.g., Amazon). There is still potential in Alphabet, and I say again, they are more than just a search engine.

I have to disclose that I do not own Alphabet directly (i.e., owning the shares), which explains why there is no “Inside The Bedokian’s Portfolio” for it. I do own it indirectly, though, through ETFs and unit trust funds.

Do note that Alphabet has two classes of publicly traded shares: Class A (GOOGL) and Class C (GOOG), with the difference being the former having voting rights while the latter does not. Both tend to trade at around the same prices, with GOOGL having a higher premium.

The Numbers Between The Four

The numbers in Figures 1 and 2 clearly stated the high returns and risks of AAPL and GOOGL compared with those of SPY and BRK.B. Despite the high-risk nature of the technology counters, their Sortino Ratios (which measures the amount of returns earned per amount of bad risk taken) are higher than the other two.

Of course, we are not looking at these four counters individually or by sector, but at the level of geographic diversification which is the U.S. markets. If we set aside USD 10,000 for the U.S. markets, allocate 25% to each of these four and rebalance them annually, the numbers may surprise you.

Fig.3: Portfolio returns with an initial amount of USD 10,000 of the four counters, with annual rebalancing, Jan 2005 to Dec 20143. Returns are shown before inflation.

Fig.4: Portfolio returns with an initial amount of USD 10,000 of the four counters, with annual rebalancing, Jan 2005 to Dec 20203. Returns are shown before inflation.

Cross referencing with Figures 1 and 2, by combining all of them, you could get the compound annual growth rate (CAGR) of GOOGL’s, a Sortino Ratio similar to that of AAPL’s, a standard deviation of BRK.B’s and the correlation near to the S&P 500. This is the “magic” of diversification, where things are averaged out across, albeit with lesser returns but giving you a peace of mind with lesser risks, too.

The Bedokian is vested directly in SPY, BRK.B and AAPL.

Past performance is not indicative of future results.

Posted by Bedokian at 8:00 AM No comments:

“The world is your oyster”.

As the saying goes, it means that there are opportunities abound and you can achieve anything in your life.

In the context of investing, there are opportunities out there, and the only thing for you to do is to take that first step to learn, analyse and finally invest.

For the Bedokian Portfolio, geographical (regions/countries) comes after asset class in terms of the degree of diversification. This meant that you could group your securities according to the type of asset class and then by geography.

However, going out into the world may pose a challenge for some group of investors, especially passive ones and/or those who do not really have the time to carry out analysis. This is where exchange traded funds (ETFs) come useful into the picture.

There are equities ETFs that cover the various regions and countries, their economic state of development, the capitalization size, and the value/growth/dividend categories. ETFs for the U.S. markets? Plenty. ETFs for developed markets? Sure. ETFs for small-cap companies? Definitely. You could do a mix-and-match a la your daily economic rice lunch using ETFs for your portfolio mix, like for example, dedicating your equities portion with Singapore, U.S. and Asia Pacific in 40-40-20 respectively. Or you could maybe consider 40-40-20 in the order of local, developed and emerging markets. Or you could even have 50-50 in U.S. large cap – local market index, or U.S. growth – U.S. value.

Still, if getting too diverse in terms of holdings is daunting, perhaps the next (or final) alternative is to just buy the world, both figuratively and literally in a sense.

Yes, there are securities that cover the world, and there are sub-types of it. All-world developed equities, emerging market equities, global technology equities, international small caps, global dividend, etc.

It may look intimidating, but as with all investing decisions, homework must be done. Good news is that it would be lesser than going through individual companies, sectors or countries.

A good cover-all would be to look for ETFs that track developed and emerging markets, and having a fair representation across all regions/countries, sectors/industries, capitalization and value/growth/dividend. Now this is really diversification to the max.

So, is there an ETF for this? In the strictest sense, none that I know of.

Usually ETFs follow an index and/or an investment theme, and these indices/themes are specific to begin with, e.g., MSCI World Small Cap Index, MSCI World Growth Index, etc. The closest index we can get at replicating the equities of the world is the MSCI ACWI Index, which covers close to 3,000 large and mid-cap constituents in 11 sectors from 23 developed and 27 emerging markets, encompassing around 85% of the global investable equities1.

According to my search, there are only four ETFs that uses the MSCI ACWI Index (shown here) and are listed overseas.

If this is not appealing, then we may have to go back one step to look at least probably two ETFs to cover the global equities part (e.g., global value and global growth). There is no hard and fast rule or guide on this as it is dependent on the individual investor’s preference and style.

Even after settled on having one, two or a few global ETFs for your equity portion, the next few steps are necessary in selecting the appropriate ETFs based on other factors like expense ratios, ETF structure, etc. I had covered this in my other post which could help you a bit.

It is a big world out there, and remember, the world is your oyster.

The Bedokian is not invested in any of the MSCI ACWI ETFs.

Posted by Bedokian at 8:00 AM No comments:

I have been using Endowus for slightly more than a year now and I had written about my experiences here. Let us see how is my initial SGD 10,000 (with a monthly contribution of SGD 200/SGD 300) 60/40 equity/bond CPF portfolio doing: 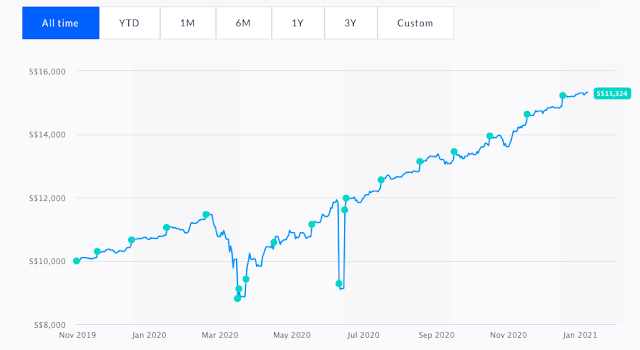 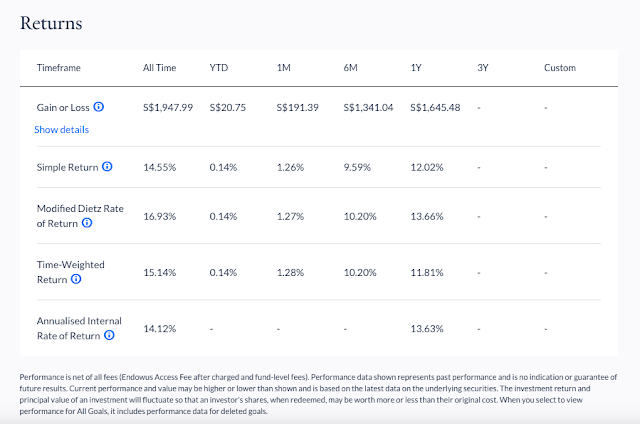 Fig.2: Table showing returns of various definitions of the portfolio (as at 7 Jan 2021).

While we had experienced a pretty volatile year in 2020 and despite the market gloominess (which was relatively short lived), the CPF portfolio had gained between 14% and nearing 17%, depending on which returns number you are looking. These numbers are pretty respectable, though usually returns would smooth out to a lower number as the years go by. To recall, I had wanted a platform where I could invest my CPF OA in markets outside of Singapore via unit trust funds at a lower expense ratio, so as to provide a return higher than the CPF OA’s 2.5% rate. And that platform is Endowus.

Endowus is a robo-advisor, which according to Investopedia’s definition, “…digital platforms that provide automated, algorithm-driven financial planning services with little or no human supervision”1. Typically, most robo-advisors (whom I shall call “robos”) will select a portfolio for you, based on your goals and risk profile that you had indicated on an online questionnaire in their platforms. After setting the portfolio up, you could just fix a periodic contribution amount (usually monthly) and the robo would manage it by buying new units of the funds that made up your portfolio and rebalance it. Robos are suitable for those who are the really very passive investor, or for those who are new to investing.

Robos had indeed changed the landscape of investing, and to portfolio-based investors like myself, the notion of an automated rebalancing with little cost sounds good to me. The major gripe that I had with robos was that the investor had no control of what to buy for his/her portfolio. The allocation is there (e.g. 60/40 or 50/50 in equities/bonds) but I cannot dictate what to buy to fill up the allocation.

To be fair and honest, I had stated earlier that robos are a good fit for the newbie and super-passive investors, but as an active investor, I would love to have the automated rebalancing function and having a say in which fund to get for my portfolio. This sounds like I am trying to have my cake and eating it, too.

A few months ago, Endowus had launched Fund Smart, where it allows you to select which funds (offered by Endowus) to invest in and set their percentage allocation. What’s more, your portfolio allocation will be rebalanced. With this flexibility, seems like I could have and eat my cake at the same time.

Now begs the question: Will the Bedokian be using Fund Smart for his CPF OA? The answer is yes. Since I already have an existing CPF OA portfolio using Endowus’ recommended fund weightages, I will start off another portfolio using my own weightage. Why? I will treat it as a diversification on a portfolio basis and this also conforms to my portfolio multiverse approach (which I had shared a bit here), so stay tuned.

The intended audience of this post is for individuals who are below 55 years old. All views, opinions and research expressed herewith are solely mine. Disclaimer applies.

Past performances of the funds stated in this post do not guarantee future results.